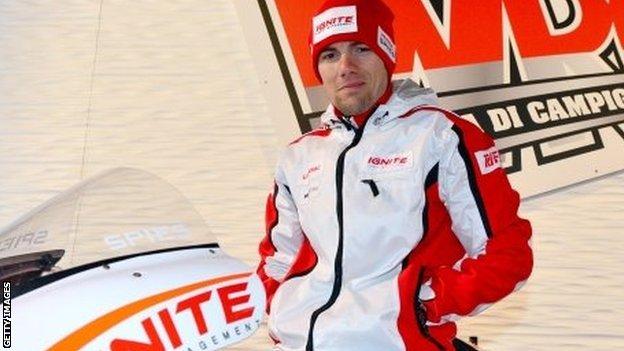 Ben Spies is confident of a return to fighting for podiums with Ducati in 2013 after a MotoGP season to forget with Yamaha last year.

American Spies, 28, endured a series of mechanical problems and crashes in 2012 which saw him finish 10th in the championship.

After signing for Pramac Ducati, Spies is hopeful of shining on the bike.

He said: "I think the bike is better than what people have seen in the last two years."

Spies took six podiums including a race win with Yamaha, with his best championship finish of fifth coming in 2011 as team-mate Jorge Lorenzo finished second to world champion Casey Stoner.

But the American is confident he can continue to fight with the likes of Briton Cal Crutchlow and German Stefan Bradl for podiums as he gets used to his new machinery.

He said: "That's still the goal. Okay, last year was bad. Bradl is fast and Crutchlow's definitely quick. He hasn't won a race yet, we did in our second year, so I'm not worried about chasing somebody else in that way.

"Dani Pedrosa and Jorge Lorenzo are definitely the top riders. Everybody else I think is at a very close level."

Three of the four Ducati riders this year will be making their debut on the Italian bike, but Spies doesn't believe that Pramac team-mate Andrea Iannone, or Andrea Dovizioso in the factory team, will be his first target to beat.

"I'm just going to ride as hard as I can ride and if that puts me the first Ducati, the last Ducati, or winning a race, I have no clue," he said.

"I've never been the type that says as long as I beat my team-mate I am happy with that, because that's just job security when people do that.

"The last two years I've had a pretty good team-mate in Jorge Lorenzo, who is the fastest person in the world, so I don't think about being the fastest on that brand. It's just getting the most I can out of it and doing the best I can."

from a crash in Sepang and, after a winter of recovery, hopes to be close to full fitness ahead of the first official test of 2013 next month.

Speaking at the the 23rd annual Wrooom event, shared with the Ferrari Formula One team at the scenic ski resort of Madonna di Campiglio in Italy, Spies said: "The injury is healed, but the muscle, strength and resistance in my shoulder is very weak right now.

The first of 2013´s pre-season tests starts in Sepang on 5 February, with the first race in Qatar on 7 April.