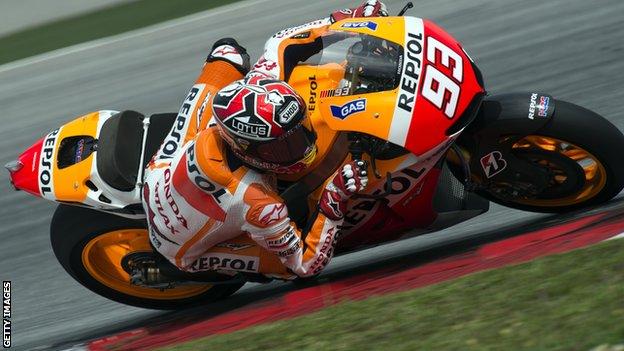 Marc Marquez was in impressive form as the MotoGP year got under way at the start of a three-day test in Sepang.

Marquez, 19, has replaced the retired Casey Stoner in the Repsol Honda team for 2013 after winning the Moto2 championship last year.

The teenager was less than a 10th of a second behind team-mate Dani Pedrosa in an all-Spanish top three.

Marquez said: "I'm very happy with how the first day went because you always have a few nerves after a couple of months out.

"I thought that I would take a little longer to get back 'on it', but right from the opening laps I felt very comfortable on the bike. We picked up confidence from the start, although obviously we can still improve."

Crutchlow said: ""It was good to be back on the bike again after a couple of months away. I'm happy enough because initially it is all about getting the feeling back after a while off the bike.

"It is clear looking at the top of the timesheets that it is going to be a fantastic season in MotoGP. I think any of us that finished in the top seven will have a shot at winning a race and I think the fans are going to be treated to some fantastic racing."

Northern Irishman Michael Laverty - also making his debut in MotoGP this year like Smith - was down in 25th spot.

Rossi's move back to Yamaha after two poor seasons with Ducati has sparked hopes of a return to form for the 33-year-old, and he showed encouraging signs by lapping within half a second of Pedrosa and team-mate Lorenzo.

Rossi said: "After two seasons away I was able to come back on the bike and remember the good feeling I always had with it.

"It's just the first test but the potential is high and I am in a good position. I am in fourth place but not far from the other three guys. I am very positive that we can improve over the next few days but I'm happy with the start."

Pedrosa set the fastest time of the day with a lap of two minutes 1.157 seconds, with veteran CRT rider Colin Edwards over seven seconds back as the slowest of the 28 riders to set a time.

The test continues until Thursday, with the first race of the year taking place under floodlights in Qatar on 7 April.