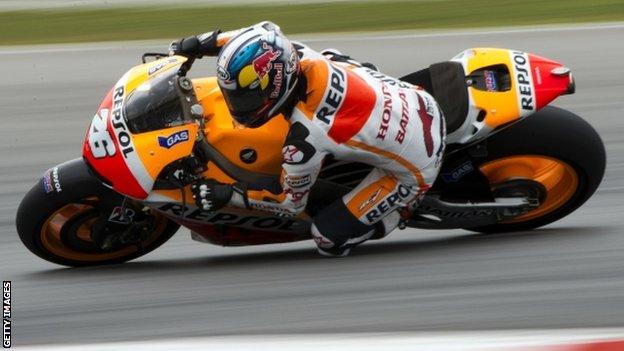 Dani Pedrosa continued to set the pace on the second day of pre-season MotoGP testing in Sepang.

Pedrosa, 27, topped the timesheets for the second successive day with a best lap of two minutes 0.549 seconds.

World champion Jorge Lorenzo was just behind in second spot, with Marc Marquez in third and nine-time world champion Valentino Rossi in fourth.

Smith, preparing for his first season in MotoGP, had been on Tuesday's opening day but improved his time by over 1.5 seconds to close on the top six.

Smith said: "Today's performance and the final lap times make me feel really happy but I am not going to get carried away.

"I am happy with the job I have done and to be so fast on such a long and technical track is great for my confidence.

"But I know reducing the gap to the leading group will be very difficult."

The test continues until Thursday, with the first race of the year taking place under floodlights in Qatar on 7 April.