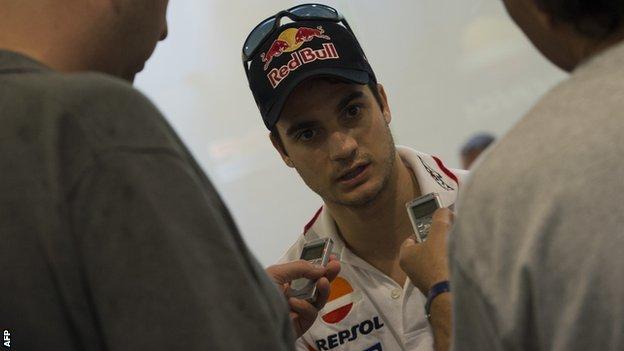 The 27-year-old, who finished second in the standings last season, put in a fastest lap of two minutes 0.1 seconds.

World champion Jorge Lorenzo was second on his Yamaha.

"It's always difficult to judge what's really happening at a test but Marquez was impressive and I really think Dani will take some stopping this season.

"Looking at timesheets you'd have to say the other standout performer is Michael Laverty - great start at a notoriously tough track to learn."

Testing has now finished for the week. Another round will take place in Sepang later this month before the season's first race in Qatar on 7 April.

Pedrosa said: "We can leave Sepang with a good feeling, because we had good lap times on all three days. We finished the test well and hope to continue like this in the following ones."

Rookie Marc Marquez was again consistently fast, ending the day in fourth spot, but the 19-year-old did have a fast crash into the final corner early in the session.

The Spaniard was unhurt and was able to continue on his spare Repsol Honda bike.

Crutchlow was the final man to break the 2:01 barrier, and repeated his pre-season claims that this year promises to be tough at the front.

He said: "It has been a very positive week and I am where I expected to be, and that's right behind the top four factory bikes.

"I can't really ask for more than that and I'm pleased with my lap times because my bike is almost identical to the bike I rode last year.

"I've built up my confidence each day but it is obvious that 2013 is going to be incredibly tough. I'll be ready to give it 100% as always and come the first race in Qatar I'll be ready to challenge."

Rossi ended the test less than half a second off the pace of Pedrosa and admitted he was delighted with his pace back on the Yamaha after two disappointing years with Ducati.

"We worked hard on the bike and improved day by day. Today we finished third in the standings which is theoretically the front row so I'm very happy with this first test."

Cructhlow's new team-mate, fellow Briton Bradley Smith, continued his progress by ending the day in eighth spot, ahead of both factory Ducati riders.