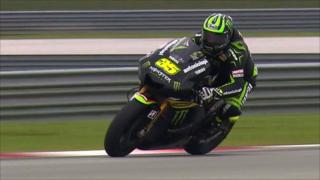 Crutchlow glad to be back on track

Cal Crutchlow says he has a "good feeling" after returning to MotoGP during pre-season testing in Malaysia, despite taking part on last season's bike.

Crutchlow tells BBC Sport's Azi Farni he believes "seven or eight guys" will be in with a chance of winning races during the 2013 season, which kicks off under the floodlights of Qatar's Losail circuit on 7 April.

The Tech 3 Yamaha rider will be riding alongside fellow Briton Bradley Smith this season, with the Oxfordshire rider making the step up from Moto2.

Fitzpatrick in contention as Pereira leads US PGA

Woods withdraws from US PGA Championship

Hodgkinson zeroes in on Mu duel after ruthless show