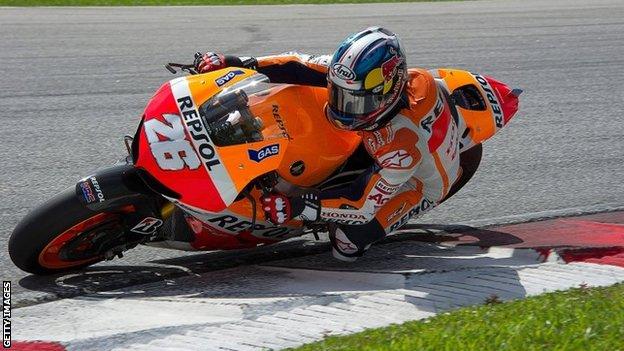 Dani Pedrosa was the man to beat again as the second MotoGP pre-season test in Sepang got under way.

Repsol Honda rider Pedrosa - who was - was fastest throughout.

Pedrosa's best lap of two minutes 1.580 seconds put him ahead of world champion Jorge Lorenzo on a rain-hit afternoon.

Crutchlow was left frustrated by the wet weather which left the riders struggling for grip.

The Tech 3 Yamaha rider said: "This morning the track condition wasn't good at all. It was greasy and the heat was just making it worse and you can see the lap times are a fair way off what we were doing here only recently.

"There were a few crashes and it was obvious that we'd got used to the grip that we had at the last test but it wasn't there and when people started to push they crashed."

The test continues until Thursday, with the first race of the season