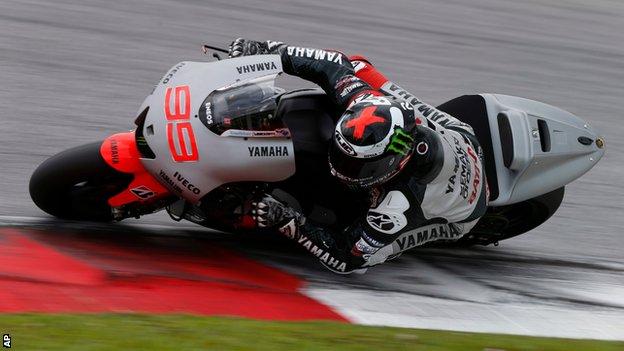 Lorenzo said: "It was a pretty good day; the track was much better."

After rain had hampered the sun returned to Malaysia with the riders registering up to 60 laps in the tropical conditions.

It was a strong day for Yamaha, with Lorenzo and Crutchlow joined in the top five by nine-time world champion Valentino Rossi.

Lorenzo added: "I could be strong from the start; a second-and-a-half quicker than Tuesday and I think I beat my record time here in Malaysia.

"We improved the setting on the bike and I feel stronger than the first Sepang test at the start of February, so I'm quite satisfied."

Crutchlow was more than a second quicker than on Tuesday but said he is only concerned with how his bike performs in the season opener in Qatar on 7 April.

"I'm happy with my pace because we've tried a couple of different settings and we need to work on fine-tuning the best one," he said.

"I'm sure if I had put in some new tyres at the start of the day I could have gone faster. But I waited to use mine around lunch and I still went faster, even though the track temperature was much higher at that point.

"I'm not really too concerned about the times though. I'm just concentrating on making the package we have got better for the first race in Qatar."

Crutchlow's rookie team-mate Bradley Smith ended the day in 10th spot, with Northern Ireland rider Michael Laverty at the back of the field on his new PBM machine.

The test continues until Thursday.