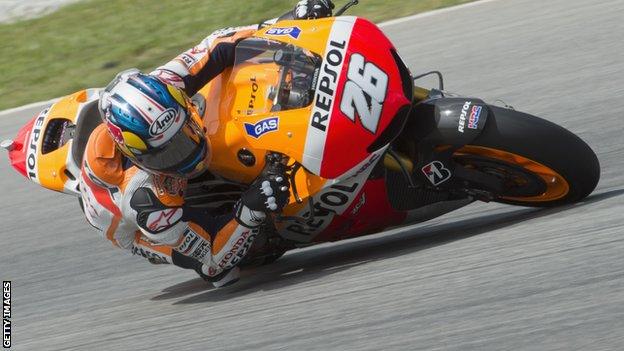 Dani Pedrosa was quickest on the final day of the second test at Sepang to restore his pre-season dominance.

The Repsol Honda rider, 27, clocked two minutes 0.562 seconds to ensure he finished fastest in five of the six pre-season testing days in Malaysia.

Marc Marquez was second fastest, finishing 0.081s behind his team-mate.

"It's been a positive three days," said Pedrosa.

Honda and Yamaha will now attend a private test at the new Austin circuit in the United States on 12-14 March.

"This is going to be an interesting test for the team and for myself," added Pedrosa.

Reigning world champion Lorenzo had been the pacesetter on the Yamaha once serious running got under way following heavy rain in the morning.

He clocked 2:00.992s before switching focus to longer runs and Pedrosa took his place at the top of the timesheet midway through the session.

"We did a good test overall. The basics of the bike are quite good," said Lorenzo.

"If it had not rained last night, I am sure I could have improved the lap time from yesterday."

Valentino Rossi, back with Yamaha after two years at Ducati, was fourth, with Honda Gresini's Alvaro Bautista clocking the fifth best time.

Crutchlow's sixth place continued his consistent presence in the top 10 during pre-season testing.

He has regularly finished with either the fifth or sixth fastest times on his Tech 3 Yamaha, with his best time coming on Wednesday when he was third fastest with 2:00.907s

The final pre-season test takes place at Jerez on 23-25 March, with the opening race of the season in Qatar on 7 April.