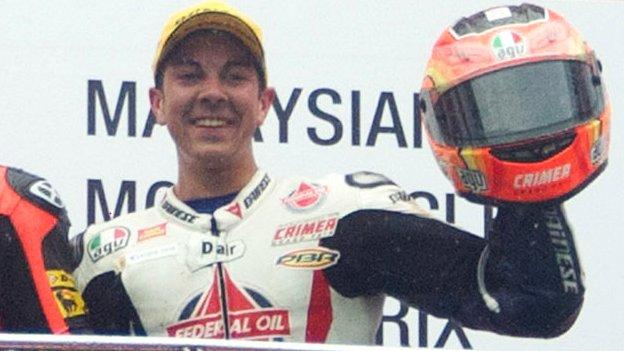 British rider Gino Rea hopes to compete as a wildcard with his own team in this year's Moto2 World Championship.

The 23-year-old was left without a ride for 2013 following the withdrawal of all-British team ESGP shortly before the first round of pre-season tests.

Rea has raised enough funds to compete in the Jerez GP on 5 May, and has targeted a further 10 races in 2013.

"I wanted to remain in the Moto2 Championship and running our own team was the only option," said Rea.

"My father and I will run the team with bike support from the British FTR manufacturer."

After losing a personal sponsor, Rea and ESGP were left with a shortfall of £150,000 to secure their place in the championship.

Since then Rea, who scored a podium in Malaysia last year, has been working tirelessly to raise the necessary funds to give himself an opportunity to continue racing in the world championship.

MotoGP rights holders Dorna have given the 'Gino Rea Race Team' the go-ahead to compete as a wildcard in an unlimited number of races.

"Our first race will be at Jerez, the third round of the World Championship, following Qatar and Austin," Rea confirmed.

"It's a shame we can't do these two but we hope that if we can attract enough sponsors we can fund the rest of the European races at least."

The team, run by Rea and father David, has the backing of British manufacturer FTR who have guaranteed them a 2013 spec bike and will take part in the final Moto2 test in Jerez next week.

At an estimated £20,000 per wildcard entry, Rea is still seeking sponsors to fund the remaining races, offering a range of sponsorship packages through his online donation page.