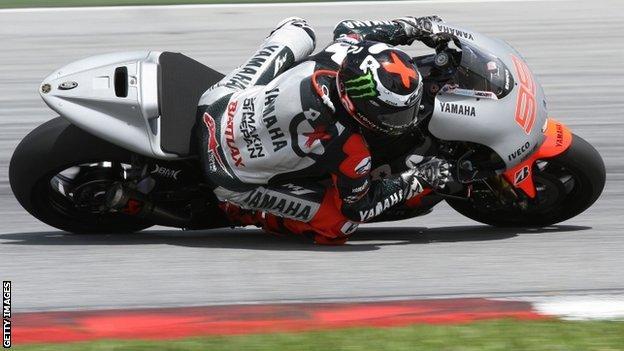 Yamaha's Jorge Lorenzo says his rivals are missing out by not testing at the Circuit of the Americas in Austin, which makes its MotoGP debut this year.

Lorenzo and team-mate Valentino Rossi are only joined by the two Repsol Hondas plus LCR Honda's Stefan Bradl.

"It's a hard track to learn," said Lorenzo, 25. "I think it helps more than some other places to have this extra time.

"Some of the riders who didn't come here will have a little disadvantage."

The United States track, which hosted its first Formula 1 race last November, makes its MotoGP debut as round two of the series on 19-21 April.

Marc Marquez set the pace for Honda, ahead of his team-mate Dani Pedrosa, on day one of the three-day test on Tuesday.

The likes of Ducati and the Tech 3 Yamaha team, which includes British riders Cal Crutchlow and Bradley Smith, are absent.

Lorenzo added: "I haven't learnt 100% of it, I need more laps to learn my lines, but for the moment it's a very beautiful track which is very complete with every kind of corner.

"In the beginning it was difficult to understand the lines but I have improved 22 seconds from the first lap."

Nine-time world champion Rossi, back with Yamaha after two years at Ducati, echoed Lorenzo's view that the calendar's third American race track was a good one but tough to learn.

"I really like the track, my first impression is that it is beautiful," said the Italian. "It's very flowing with a lot of fast corners and a lot of change of direction. It is fun on the bike.

"Its very important to have this time as the track is so difficult, the are a lot of blind corners where you have to understand where to brake."

The season starts at Qatar's Losail circuit on 7 April.