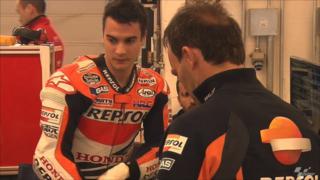 Honda rider Dani Pedrosa reveals he called an early halt to his test in Texas due to a neck injury.

The Spaniard reveals he "suddenly felt pain" on his first lap on the final day of testing at the Circuit of the Americas and decided not to continue.

The two-time 250cc world champion has finished runner-up in MotoGP on three occasions, and will start the season as one of the favourites to lift the title for the first time after Honda's impressive pace in pre-season testing.