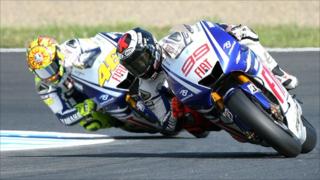 BBC Sport takes a look back at Valentino Rossi and Jorge Lorenzo's MotoGP rivalry ahead of the opening race of 2013 in Qatar.

The duo are set to renew their rivalry as Yamaha team-mates in 2013 as Rossi returns to the Japanese outfit following two barren seasons with Ducati where he failed to add to his all-time record of 79 MotoGP victories.

Rossi won 46 races and four world titles between 2004 and 2010 with Yamaha, while Lorenzo has claimed both of his world championships with the team since joining the premier class in 2008.

'Gentleman, modest and one of Liverpool's greatest'

Bob Willis Trophy Final: Warwickshire lead after Lancashire all out for 78 - radio & text

'It's time for Solskjaer to prove himself'