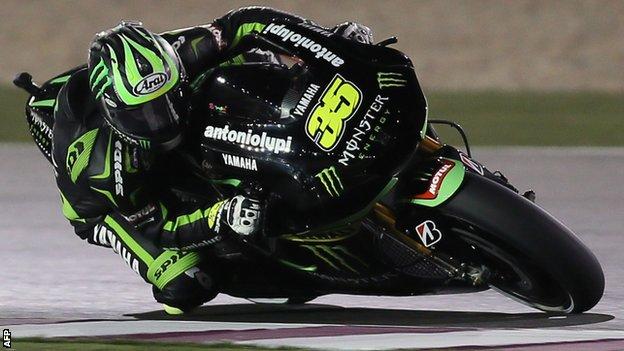 Cal Crutchlow impressed in the first practice session for the opening MotoGP race of the season in Qatar.

The British rider clocked a time of 1minute 56.743sec, to finish in second spot, 0.058s behind world champion Jorge Lorenzo.

"As is always the case on the first night in Qatar, the track was quite dirty, particularly off the racing line," said Crutchlow.

For the first time ever the first practice session has a bearing on qualifying as the combined top 10 from across the opening three practices will go on to make up the second qualifying line-up on Saturday.

"We need to make some changes to the bike because I felt we had too much weight transfer on braking and acceleration but I've got to be happy to finish in second and ending up in between Jorge and Valentino," added Crutchlow.

"Second place is great but I am not reading too much into it. As the track conditions improve some of the rest will get faster and it is still going to be very tough to be on the podium."