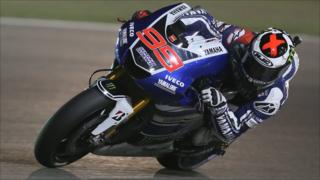 The reigning world champion reveals it took "three or four laps at the maximum" to pip the Briton to the fastest time, with Honda's Dani Pedrosa completing the front row at the Losail International Circuit.

Valentino Rossi, who has rejoined the Yamaha Factory Racing team alongside long-time rival Lorenzo after two seasons with Ducati, finished seventh and will line up on the third row of the grid.

When Britain went to the 'Iron Curtain Olympics'

The £100m man set to be England's future