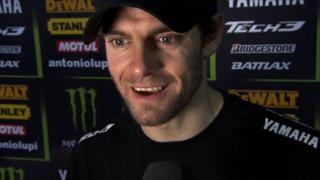 Crutchlow 'should have finished second'

Cal Crutchlow feels he "should have finished second" after an early mistake left him in fifth position in the season-opening Qatar MotoGP.

Crutchlow ran wide at the first turn while battling with factory Yamaha rider Valentino Rossi, and salutes the seven-time world champion's ride to second place as the best he has seen from him "in five years".

Crutchlow's Tech3 Yamaha team-mate Bradley Smith also vows to "learn" after a crash at turn seven that brought an early end to his MotoGP debut.

Forest hold on to beat Hammers as Rice penalty saved

How ‘pathetic’ Man Utd were thumped by Brentford