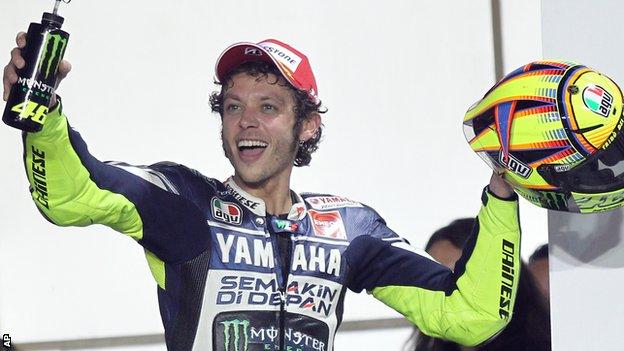 We have the sparkle back in MotoGP.

On the one hand we have debutant Marc Marquez and, on the other, old dog Valentino Rossi. Both of them surprised me in a cracking race in Qatar as the season got under way.

Jorge Lorenzo won the race but it was Rossi, who took second from Marquez in a great duel, who caught the eye again.

Rossi did a far better job than I expected and I am so pleased for the sport. He can reinvigorate it; he is everyone's hero and you saw why with some real close racing, daring moves and all in his own style.

There are hardly any fans in Qatar but at the end of the race all you could hear were screams of "Rossi, Rossi". Just wait until we get to Europe - it will be deafening.

If Rossi can keep that up week in, week out, he can be a championship contender again.

After an early mistake saw him run off the track, he was nowhere near contention with 10 laps remaining, but the ground he made up was incredible.

He got stuck in and was reeling off laps half a second faster than anybody else - when the tyres were on their way out - which was phenomenal. I was hugely impressed.

Many people, particularly at 34 years of age and with nine world championships in the trophy cabinet, would have thought, 'I messed up - let's wait until next weekend', but he produced a stunning performance.

It was a Rossi masterclass full of the trademarks of the early stages of his career, starting slowly and working his way through, finding ways of passing where nobody else could.

Valentino Rossi has won a record 79 grands prix in MotoGP/500cc, but has not won one since Malaysia in 2010

We also had the pleasure of seeing Marquez's amazing debut.

The 20-year-old pulled off a pass which was outrageous, when Rossi left about a metre of space and the youngster jammed his Honda down the side and barged his way past. For a rider in his first MotoGP race, it was a sensational display.

Lots of people will be shocked by the result. Lorenzo would not have expected Rossi to end up second after he slid down the order at the start, while Dani Pedrosa will not have thought team-mate Marquez would outdo him.

I wrote recently that there are four potential champions this year, and the performances of Rossi and Marquez have strengthened that view.

Briton Cal Crutchlow was right in the hunt for a podium finish until he got pushed into a mistake by Rossi, but he was riding really hard to stay with the factory Hondas and Rossi and he did all he could on an inferior bike. He was right there all race and he has proven he belongs there.

Compatriot Bradley Smith will be disappointed to start his MotoGP career with a crash but it is going to be a learning curve all season and he qualified well.

In the Moto2 race, Britain's Scott Redding was really spirited; he could not have done any more as he came second to Spaniard Pol Espargaro. He was always losing out on top speed down the straight but he was so close to a win. He can definitely challenge for the title.

It was a brilliant opening round of the championship and I cannot wait for the next race in Austin, Texas in a fortnight's time.