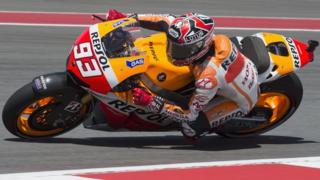 Spain's Marc Marquez becomes the youngest rider to earn a MotoGP pole position after setting the fastest time ahead of Sunday's Grand Prix of the Americas.

The 20-year-old went quickest early on in the final part of qualifying in Austin, ahead of Repsol Honda team-mate Dani Pedrosa and Yamaha's world champion Jorge Lorenzo.

Marquez admits he was "nervous" going into the session, but hopes for a "good race" after claiming his maiden pole position.

Elliott has surgery on ankle injury