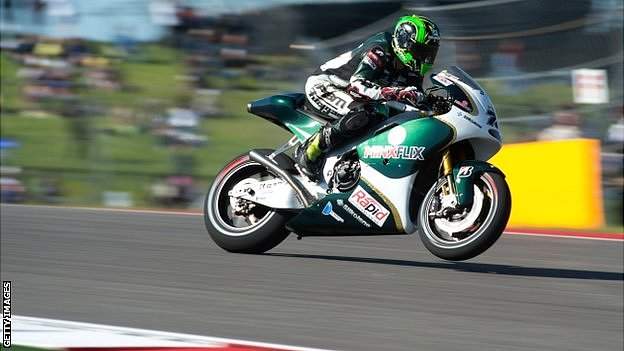 PBM team owner Paul Bird has said he is "happy, but not surprised" at rider Michael Laverty's start to the season.

Laverty, 31, arrived from the British Championship as a relative outsider but has impressed in his debut races.

The Northern Irishman finished 16th in Texas after dropping to last in the opening laps.

Bird said: "The top riders in MotoGP are at another level but I think he can quite comfortably fit into the ilk of riders from eighth or tenth back."

Bird was adamant that he would select a British rider to ride his British-built Claiming Rules Team bike but his announcement of Laverty to replace James Ellison last year was met with some scepticism.

However Laverty silenced the critics with a second fastest CRT time at the first pre-season test in Sepang in February and has since made great strides with the PBM chassis, which only began development during the winter break.

"He's not scared to have a go and he is a racer at heart. It's probably helped in his approach, thinking 'if I have doubters out there I want to silence them'."

Laverty is the lone entrant onboard a PBM bike this year, while his team-mate, Colombian Yonny Hernandez, is riding an Aprilia, the bike which Aleix Espargaro rode to the top of the CRT standings in 2012.

Bird believes that Espargaro, who finished as the highest-placed CRT rider at the two opening rounds of the season, in Qatar and Texas, is the runaway favourite to take the CRT honours again this year but his Power Electronics Aspar team-mate is the benchmark for Laverty.

"I think Espargaro is probably out of our reach," he said. "I just want to keep doing what we're doing and if we can get to battle with the likes of Randy De Puniet and beat them in the odd race then great."

The third round of the MotoGP championship is held in Jerez, Spain, on 3-5 May.