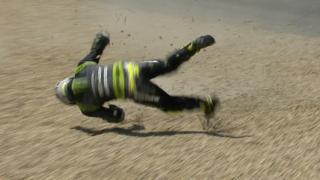 An all-Spanish top three was completed by second-placed Dani Pedrosa and Marc Marquez in third.

However, in a dramatic session Crutchlow, Rossi and Pedrosa all suffered crashes.

Spirit dominate Originals to win second in a row