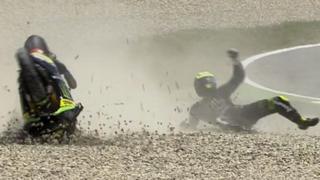 Britain's Cal Crutchlow says he made "a stupid mistake" as he crashed out of the Catalunya Grand Prix on Sunday.

The Tech 3 Yamaha rider had started second on the grid, but dropped down to fourth early in the race and slid off the track after only five laps.

Crutchlow insists the accident was "completely my own fault" and feels he could have snatched a podium place had he not crashed out.

Watch: The 77 goals that won Rangers the title