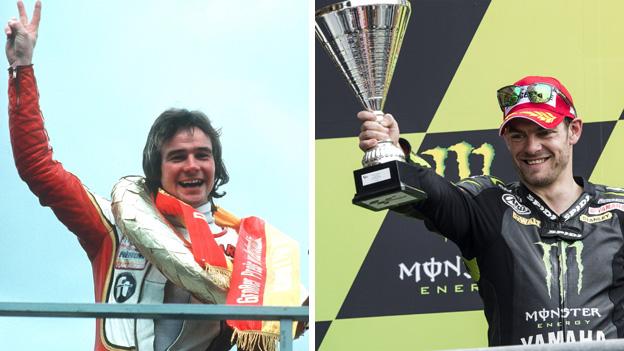 Cal Crutchlow has the potential to be heir apparent to British motorcyling legend Barry Sheene.

OK, he has not won a grand prix yet but he has been the best British rider since Sheene by some margin.

Crutchlow is solid week in, week out and has been on the podium regularly this season. In four of the last five races he has finished in the top three.

It has been a long while since we have had a rider like that, especially at a time when we have some of the greatest riders ever.

He finished second in the German Grand Prix on Sunday and, for me, that was his best race performance yet.

He was just 1.5 seconds behind race winner Marc Marquez and that was the nearest he has ever been to a win by some margin.

It was a proper solid second place for Crutchlow and it really looked like he might have closed Marquez down at one stage, he really had him on the ropes.

Crutchlow's result is all the more impressive when you remember that he is not on a factory bike, he is on a satellite bike, and it is potentially frightening to think what he could achieve if given the equipment.

Yamaha want to take note of what he is up to because a factory bike would not only give Crutchlow a bit of a performance enhancement but also a psychological enhancement, because he will be racing on a level playing field with everyone else at the front.

Week in, week out he is the only rider on a non-factory bike who is anywhere close to the ones who are and that is very impressive.

I would like Yamaha to give him a factory bike, but if I was his agent I might be looking at Ducati, because there would be more percentage coming in.

Crutchlow will be the person who will make the decision, I am sure he will be looking at all of the options and let's hope it will be the right decision.

He is getting closer to that first win and I would say the next race, the United States Grand Prix, is one Crutchlow can truthfully believe he can win.

The German Grand Prix circuit, Sachsenring, was as good a circuit as you will get for a non-factory bike because it is very, very short and does not have long straights.

The United States GP circuit, Laguna Seca, is another circuit that is equally as short and has shorter straights and it is a track that could really fall into Crutchlow's hands in terms of the suitability of his bike.

There is also a very, very good chance that reigning world champion Jorge Lorenzo and Dani Pedrosa - who was top of the standings before Sunday - will not be at 100%, with the two having missed the German GP race because of injuries they suffered in practice.

Crutchlow has built the momentum up, he is on a roll, and some other good news for him is that he will know the Laguna Seca circuit better than Marquez.

The Spaniard will not have raced there because Moto2, the class he was racing in before this season, does not race on that circuit, so in that sense it will be advantage Crutchlow.

I just hope for his, Britain's and everyone else's sake that he does get the win he deserves.