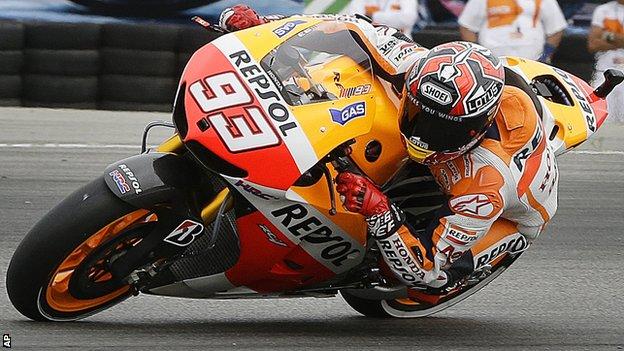 Marquez has never raced at Laguna Seca before but the Honda rider was still quickest ahead of Stefan Bradl.

Reigning champion Lorenzo and Pedrosa were both passed fit by a doctor after the pair missed last weekend's German Grand Prix with injuries.

Lorenzo, who was sixth quickest, bent a titanium plate in his collarbone

The Spaniard had surgery in Barcelona last weekend where a new plate was inserted with 11 screws and a bone implant, and he decided to travel to California

Fellow Spaniard Pedrosa, who fractured his collarbone in a crash, sat out the morning practice and was 11th fastest in the afternoon.

Crutchlow was quickest in the first session before conditions improved substantially with the top eight were separated by just half a second.

Afternoon practice was held up for 20 minutes while marshals cleaned the track of oil after Blake Young, making his second appearance of the season, crashed on turn five.