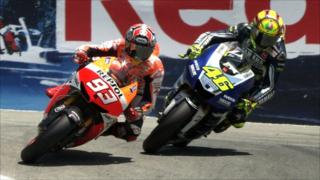 Marc Marquez becomes the youngest ever back-to-back race winner in MotoGP by winning the US Grand Prix at Laguna Seca.

Championship leader Marquez produced a memorable overtake on Rossi early on at the famous Turn 8 chicane - commonly known as 'The Corkscrew', where riders plunge down 33 metres in height, the equivalent of five and a half storeys, in just 137 metres of track.

'Door open' for Stokes to return at World Cup