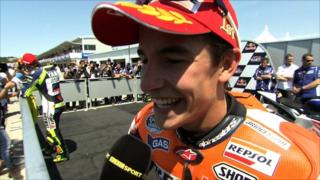 Marquez and Rossi on corkscrew move

Honda rider Marc Marquez discusses winning the US MotoGP at Laguna Seca and his memorable overtaking manoeuvre on Valentino Rossi.

Rossi jokes he needs to "take the trademark" after pulling a similar move at Laguna Seca's famous 'Corkscrew' corner on Casey Stoner in 2008, with Marquez telling BBC Sport's Azi Farni he thought the move was "impossible to repeat".

Marquez, 20, had never raced at the California circuit before but produced a superb ride to stretch his championship advantage over his injured team-mate Dani Pedrosa to 16 points, with reigning world champion Jorge Lorenzo finishing one place behind Pedrosa in sixth.

Djokovic sees off Paul to set up Tsitsipas final

I didn't care about danger - Yarde