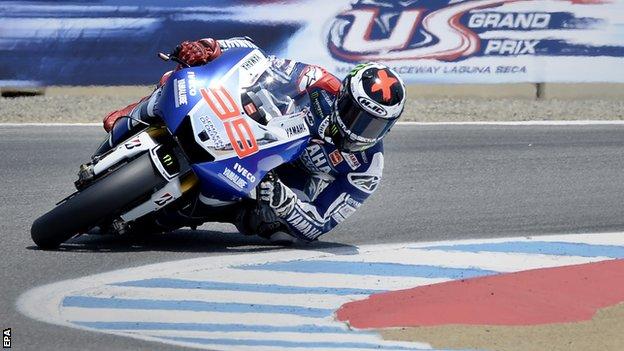 Jorge Lorenzo is confident he can beat injury problems to catch leader Marc Marquez in the MotoGP title race.

Lorenzo is third in the standings, 26 points behind fellow Spaniard Marquez, with nine races of the season left.

The 26-year-old was sixth at the United States Grand Prix on Sunday, racing with a broken collarbone suffered during practice at Assen in June.

"I will work from now until the end of the season to win a lot of races to recover these points," he said.

The Yamaha rider added: "I will not be 100% because the bone needs at least two months to heal, but obviously I will be much better than [at Laguna].

"Also I'm waiting for some improvements for the Yamaha so I'm sure I can fight to recover all the points."

Marquez extended his championship lead over second-placed Dani Pedrosa by winning in the United States at Laguna Seca.

The 20-year-old, enjoying his debut season in MotoGP, had moved to the top of the title standings after winning the German GP at Sachsenring on July 14 - a race Lorenzo and Pedrosa missed through injury.

Lorenzo broke his collarbone when he crashed in practice at the Assen GP, but rode to finish fifth 48 hours later.

He crashed again in practice at Sachsenring two weeks later, and withdrew from the race after damaging the titanium plate he had been fitted with after suffering his injury at Assen.

After racing with the injury at Laguna Seca, he has three weeks to recover during the 18-race season's summer break, before the Indianapolis GP on 18 August.