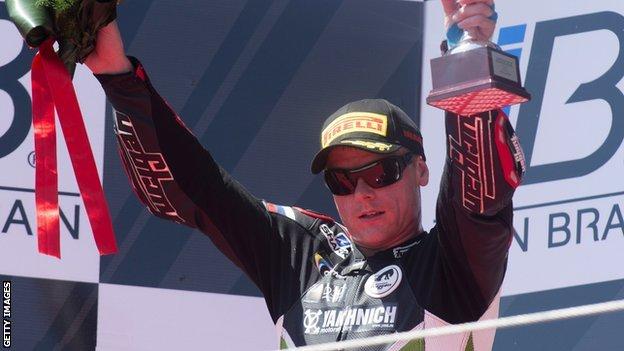 Tech 3 boss Herve Poncharal has called Sam Lowes "an exciting prospect for any Moto2 team manager" after rumours linked the Briton to the team for 2014.

Lowes leads the World SuperSport standings by 34 points on a Yamaha.

Poncharal told BBC Sport: "We are both with Yamaha and [sponsors] Monster and he has real potential so I'd be happy, but I don't know what he wants."

It could mean an all-British line-up for Tech 3 in Moto2 as Danny Kent's contract runs until the end of 2014.

Kent, 19, has struggled in his debut year in the Moto2 category, posting just one points finish in the first eight races.

Poncharal is pleased with his progress, however, saying: "Nobody is enjoying being behind, but our reference point is not Scott Redding or Pol Espargaro [one and two in the standings], it's Sandro Cortese [who] is the winner of the Moto3 championship. He's on what is supposed to be the best bike, with a strong team, and we are very close to him every race.

"Danny has a great potential and he's young. It's not easy for him, but I think it will come. It's just a question of waiting, but nobody likes to wait."