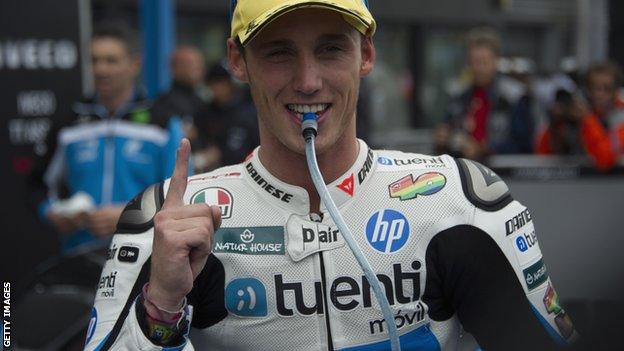 The deal was agreed with Yamaha but Spaniard Espargaro, 22, will debut in their satellite team next year.

Yamaha factory riders Jorge Lorenzo, 26, and Valentino Rossi, 34, are under contract until the end of 2014.

In May, Crutchlow revealed Yamaha's interest in Espargaro, expressing frustration at not being offered the same package. The British rider eventually moved to Ducati.

Espargaro has never won a World Championship but was third behind Marquez and Nico Terol in a hard-fought 125cc season in 2010 and took Marquez to the penultimate round of Moto2 in 2012.

His 24-year-old brother, Aleix, rides for the Aspar Team in MotoGP and is the top rider from a Claiming Rules Team, who have greater fuel allowances than the factory and established satellite teams and can make more engine changes per season.

Next year will be the second time the siblings have competed against each other in a Grand Prix class, having contested the 2011 Moto2 championship in different teams.