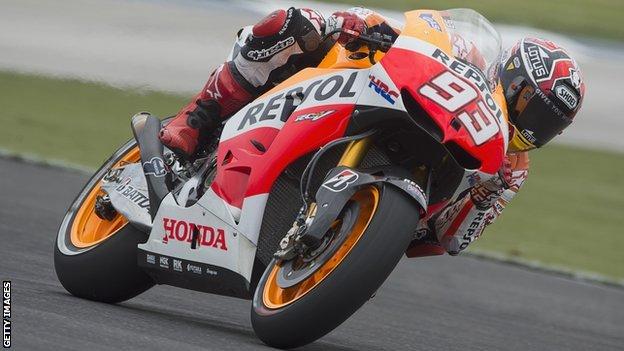 Championship leader Marc Marquez topped the timesheets in both practice sessions ahead of the Indianapolis Grand Prix.

The 20-year-old from Spain beat England's Cal Crutchlow into second in the opening session.

Marquez then pipped compatriot Dani Pedrosa, who leads the title race by 16 points, later in the day.

Crutchlow, who finished the day in fifth position, said: "It is a decent start and something to build on."

Marquez's time of one minute 40.781 seconds was three-tenths faster than Crutchlow in first practice as MotoGP returned after the mid-season break.

Pedrosa briefly held top spot in the second session before Marquez registered a lap of one minute 39.502secs.

Crutchlow, currently fifth in the championship, is confident of building on his practice sessions in qualifying on Saturday on his Monster Tech 3 Yamaha.

"We tried a few different things on the bike and we need to find some more feeling from the front end," he added.

"Overall it has been a good day because we know this is not the easiest track for Yamaha."