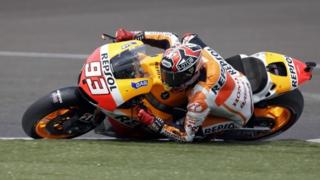 The 20-year-old finished more than half a second ahead of defending champion and fellow Spaniard Jorge Lorenzo, with Dani Pedrosa third.

Britain's Cal Crutchlow will start the race - the 10th of 19 in the season - from fourth on the grid.

Sport should never be a political tool - Horner