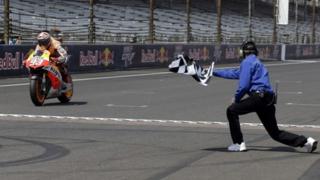 Marc Marquez extends his lead at the top of the MotoGP World Championship to 21 points with an impressive win at the Indianapolis Grand Prix.

Marquez started on pole but fell down to third at the start of the race before re-taking the lead with 15 laps remaining and coasting to victory.

Dani Pedrosa was second, with Jorge Lorenzo in third, while Britain's Cal Crutchlow put in a battling display but finished fifth.