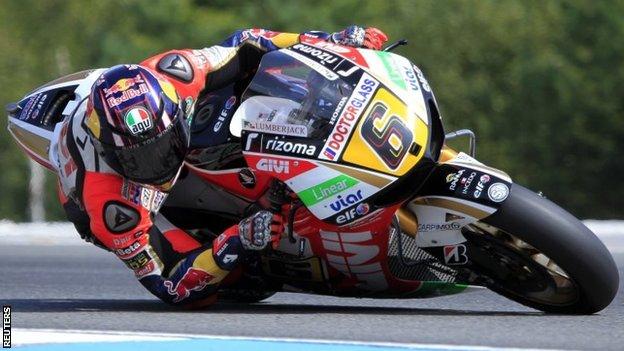 Reigning world champion Jorge Lorenzo had been quickest all day until the German rider edged ahead of him at the end of the afternoon session.

Lorenzo was second, with fellow Spaniard Dani Pedrosa in third place and Valentino Rossi in fourth.

Bradl, 23, took his first pole position two races ago at Laguna Seca, where he scored a career-best finish of second place.

Crutchlow, 27, said: "It wasn't an easy first day here in Brno but the positive point is I was very consistent and the lap times between the top six are very close.

"We need to improve the bike, so I am hoping it stays dry tomorrow and we can try the modifications we need to improve. I can't turn the bike well and I am also struggling a little bit for rear grip.

"I got my first podium in Brno last year and it would be great to repeat that achievement on Sunday. It will be tough but I will be giving it my all."

Meanwhile, American rider Ben Spies - who injured his shoulder last weekend in Indianapolis - has had surgery on both shoulders in Dallas and will be missing for six to 12 weeks.

His place in the Pramac Ducati team this weekend has again been taken by Michele Pirro, who ended the day in 13th place.