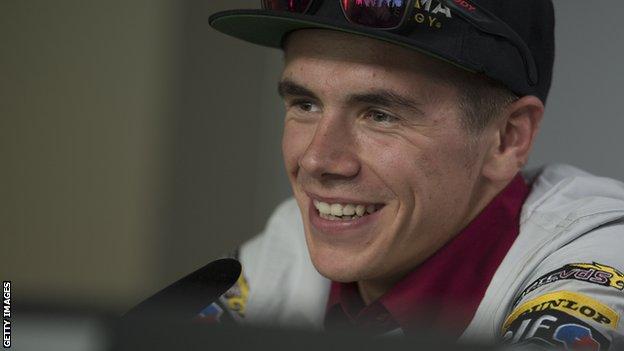 Briton Scott Redding has signed a contract with Gresini Honda that will see him move up to MotoGP from 2014.

The two-year deal with the satellite team means the 20-year-old will ride a "production" Honda.

The Marc VDS rider has a 21-point lead in the Moto2 championship, after taking two race victories this season.

Redding told BBC Sport: "It's definitely the right step for me. I've got to look to my future and I think to go with Honda is good."

Redding is aiming to become the first British world champion in any GP class since Barry Sheene won the 500cc title in 1977.

He will partner Alvaro Bautista at Gresini Honda next year, as the 28-year-old Spaniard has extended his contract.

Bautista, a former 125cc champion, will continue riding the team's prototype Honda next year, with Redding on the production Honda RCV1000R, which is being tested by two-time world champion and former Honda rider Casey Stoner.

In an interview with BBC Sport, to be broadcast over the weekend, Redding said: "The first year on the production bike for me is not a bad idea. I can learn the bike a bit, it's not a big difference. It might even be a competitive bike, you just don't know yet.

"So it will be interesting to see how it is on track and the year after I should be getting a factory bike and we can see what we can do."

Redding was first linked with a step up to the premier class in 2012 when he tested the Ducati MotoGP bike, but opted to stay in Moto2 for 2013 and fight for the title.