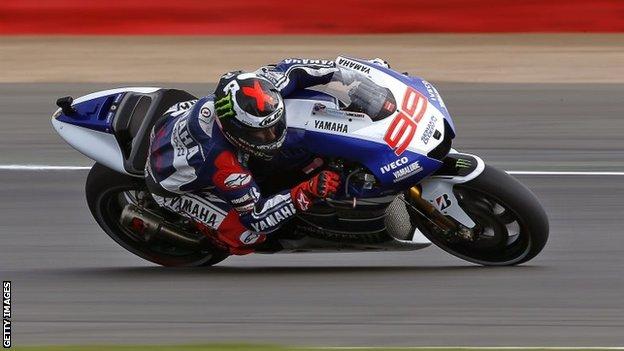 World champion Jorge Lorenzo was fastest as he edged out title rivals Marc Marquez and Dani Pedrosa in practice for Sunday's British Grand Prix at Silverstone.

Lorenzo, 26, has not won any of the last five races to fall 44 points behind championship leader Marquez.

But he was back to his best on Friday, putting his Yamaha top of the timesheets with a commanding lap.

Repsol Honda rider Marquez, 20, set the best time of a cold morning session with a lap of two minutes 3.816 seconds, but Lorenzo was the man to beat as the track warmed up in the afternoon.

His lap of 2:02.734 was two tenths of a second quicker than Spaniard Marquez's best effort, with 27-year-old Pedrosa nearly half a second behind his team-mate in third and Gresini Honda's Bautista, 28, next.

Nine-time world champion Valentino Rossi, 34, was fifth on his Yamaha, while Crutchlow, 27, will be hoping to improve in qualifying on Saturday after taking

In the Moto2 class, championship leader Scott Redding - who was fastest in the morning session but ended the afternoon in fifth.