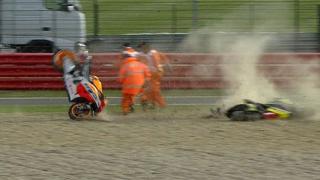 World championship leader Marc Marquez injures his shoulder in a near collision with Silverstone marshals during the warm-up for the British MotoGP.

Marquez came off his Repsol Honda at Vale corner where Cal Crutchlow had himself just crashed, with the Spaniard's bike narrowly avoiding both the British rider and marshals who were clearing away Crutchlow's Yamaha Tech 3.

Marquez suffered a dislocated left shoulder in the incident but it was popped back in, and he managed to compete in Sunday's race - where he finished second just behind Jorge Lorenzo.

Joshua v Usyk - all you need to know