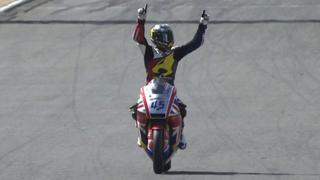 The Marc VDS rider led for most of the race and claimed his third win of the season ahead of pole-sitter Takaaki Nakagami and Tom Luthi.

Redding, who leads the riders' championship by 38 points with six races to go, says he "enjoyed every second" of the win - and praises the "amazing reception" from the home fans.

Houghton out of World Cup qualifier

'It's still sinking in!' - Raducanu on 'whirlwind' US Open win