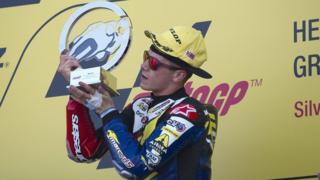 BBC Points West goes behind the scenes with Scott Redding as he secures a home win in the British Grand Prix at Silverstone to edge him closer to the world Moto2 championship.

Redding, from Quedgeley, now has a 38-point advantage over Pol Espargaro in the standings.

His victory on Sunday came after he agreed a deal to move up into MotoGP from next season.

'I don't want to let go of the trophy'