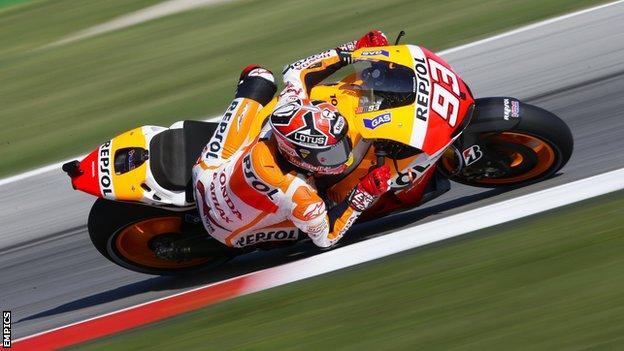 The 20-year-old - who has won five times this season to lead the standings by 30 points - pipped Repsol Honda team-mate Dani Pedrosa by 0.33 seconds.

Valentino Rossi was third on his Yamaha ahead of Jorge Lorenzo, with British rider Cal Crutchlow only 10th.

Aleix Espargaro was an excellent fifth on his CRT machine.

Marquez is aiming to become the first rookie to win the world championship since American Kenny Roberts in 1978 and has taken 140 from a possible 150 points in the past six races.

He was quickest on Friday morning and was on top again in the afternoon session, although Pedrosa looked set to beat his time in the closing stages only to miss out in the final sector.

Meanwhile, former world champion Casey Stoner - who retired from MotoGP last year - has reportedly decided to leave car racing at the end of this season.

Stoner moved into the second tier of Australian V8 Supercar racing this year, driving on a one-year contract for Red Bull, but has failed to make an impact, managing just one top-10 finish after 14 rounds of the 19-race season.

"I will probably do some car racing here and there in different times," Stoner was quoted by Australia media as saying at a function in Brisbane on Friday.

"To be honest, after this year, I realised I want to get away from competition for a little while."

Stoner had fuelled speculation of a return to motorcycling by agreeing to test for Honda in Japan last month but the team made it clear there were no plans for the Australian to ride as a wildcard at any races this season.