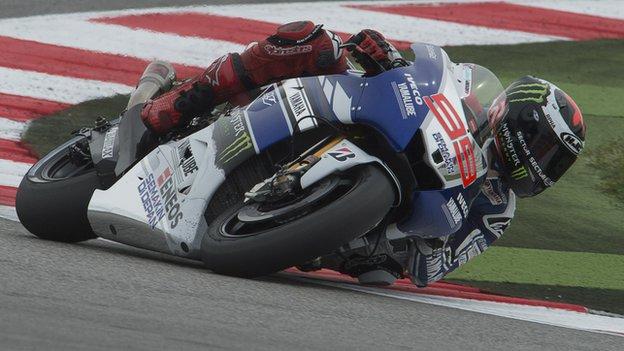 Jorge Lorenzo must take risks to put pressure on Marc Marquez if he is to have a chance at a third title, says his Yamaha team boss Wilco Zeelenberg.

Lorenzo, 26, has won the last two races at Silverstone and Misano but trails Marquez by 34 points in the standings.

"We have to risk everything now to close the gap because we have nothing to lose," said Zeelenberg.

Lorenzo and Marquez have each won five races while Dani Pedrosa, who is level on points with Lorenzo, has won two.

In a bid to keep his championship alive, Lorenzo raced in Assen less than 48 hours after breaking his collarbone but both he and Pedrosa were forced to miss the following round at Sachsenring after further crashes saw them both cause injury to their collarbones.

Marquez subsequently went on to become the first rookie to take four consecutive wins in the premier class.

Zeelenberg believes the pressure is now on 20-year-old Marquez to maintain his lead in his quest to become the first rider since Kenny Roberts in 1978 to win a premier class title in their rookie year.

"Marquez has the championship to lose," he said.

"It will get into his mind that he's actually racing for the championship and if everything goes very smooth and easy he can do it, but if you give him pressure it's more difficult and that's what we're trying to do."

Marquez, who replaced two-time world champion Casey Stoner at Honda, has broken a succession of records this year, taking the most points and wins for a rider in their debut year.

"Marc is strong in fights because he's very physical over the bike. He can control the bike very well and he's braking very late so in this case we're thinking about how to defeat him," Zeelenberg said.

"When you have a new competitor you need to see where he's strong and where he's weak."

With five races remaining in the championship, the next round is at Motorland Aragon in Spain on 29 September - where Marquez will be chasing his first MotoGP win on home soil.