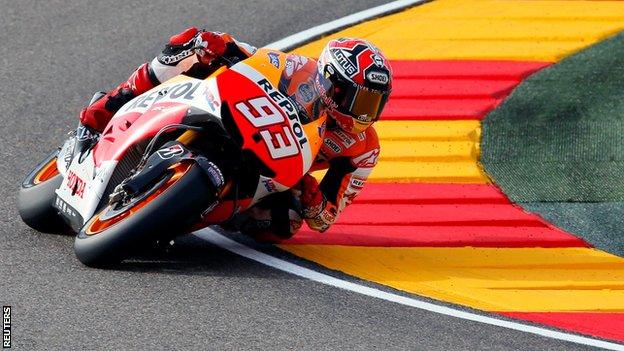 Championship leader Marc Marquez was the fastest man on track yet again in practice for Sunday's Aragon Grand Prix.

And his Repsol Honda set the best lap of the day, a one minute 48.987 putting him ahead of German Stefan Bradl.

Marquez - who won the Moto2 championship last year - is bidding to become the first rookie to win the premier class title since Kenny Roberts in 1978.

And he was in fine form once again, ending the morning session eight thousandths of a second behind pace-setter Lorenzo before finding the fastest lap of the afternoon to end the day on top.

Qualifying takes place on Saturday, where Marquez will be aiming to take his seventh pole position of the season.