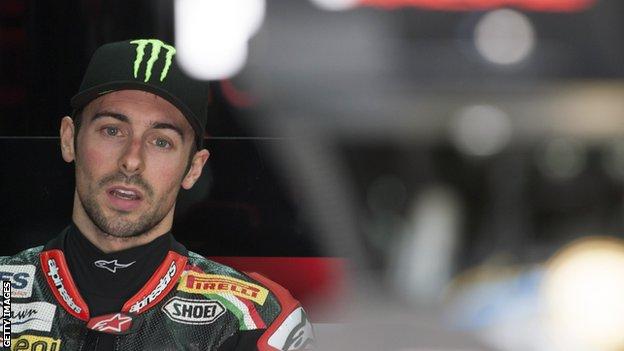 World Superbike title challenger Eugene Laverty says he is holding talks with the Ducati team about a possible switch to MotoGP in 2014.

Laverty has been talking to Aprilia about a MotoGP ride in 2014 and Ducati are now holdings discussions with him.

"We are also talking to Ducati as well," Laverty told BBC Sport.

Rea, currently out of action after suffering a broken leg at the Nurburgring World Superbike round at the start of September, had also been linked with a possible move to MotoGP for next season.

However, he confirmed on Tuesday morning that he would be remaining with the Honda World Superbike team.

"I'm excited to let you all know now that I will remain with Pata Honda in SBK," tweeted Rea, who will miss the remaining two rounds of the World Superbike season.

Despite being in second spot in this year's World Superbike series, Laverty is likely to lose his ride in the Aprilia team for the 2014 campaign.

Marco Melandri is being tipped to join Laverty's current team-mate Sylvain Guintoli in the Aprilia World Superbike line-up even though Laverty is currently the main challenger to series leader Tom Sykes.

"There are a lot of delays. Politics plays a part too," added Laverty, whose brother Michael currently rides for the Paul Bird Team in the MotoGP series.

"I'm hopeful I can get something sorted in the next few weeks."

Laverty's victory in last weekend's second race at Laguna Seca in California left him only 23 points behind Sykes in the Championship with 100 points still up for grabs in the series.

The Toomebridge man rated Sunday's win as the best victory of his career.

"I didn't really think we had it in us because I was struggling to hang on to the guys.

"But I wanted it so badly over the last few laps that I somehow managed to win."

The victory extended Laverty's run of podium finishes to five, which have included three wins.

"With four races remaining, the important thing is to finish all the races and have no mishaps.

"Winning the Championship, it's very realistic."