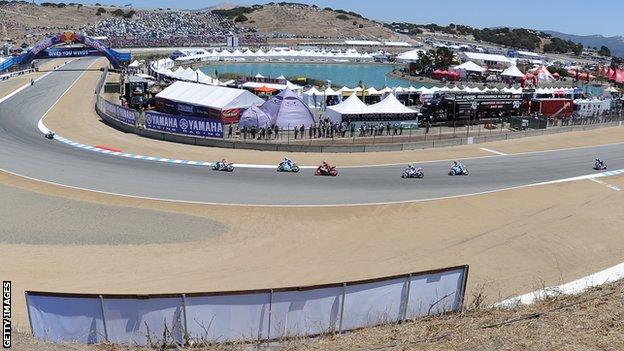 The USA's Laguna Seca Grand Prix has been dropped from the provisional 2014 MotoGP calendar.

Laguna Seca has hosted a race every year since 2005 but its place on the calendar was put into doubt by the addition of the Grand Prix in Austin.

The British Grand Prix will take place at Silverstone on 31 August.

The United States will host two races - the Grand Prix of the Americas, in Austin, and the Indianapolis Grand Prix.

A statement from the Laguna circuit said: "Unfortunately, and in spite of loyal support from fans, sponsors and media, there will not be a 16th US Grand Prix in 2014.

"At this time, the US is only able to support two MotoGP events.

"The support provided by the states of Texas and Indiana make it difficult for us, as a not-for-profit, to currently compete."

This year's Laguna Seca GP was won by Marc Marquez, racing for the first time at the famous Californian circuit, known for its trademark Corkscrew corner.

The Brazilian Grand Prix, if it is confirmed, will be held on 28 September. The race is subject to the track being approved as it needs to be renovated, with work scheduled to start in December and finish in April or May.

Brazil last hosted a Grand Prix in 2004, when the Rio Grand Prix was won by Makoto Tamada.

The Termas de Rio Hondo hosts the third race of the season, to be held on 27 April. It sees MotoGP return to Argentina for the first time since 1999, when the 500cc race at the Autodromo Oscar A Galvez in Buenos Aires was won by American Kenny Roberts Jr.

The British round keeps its slot at the end of August, after moving there from its regular June date this year.