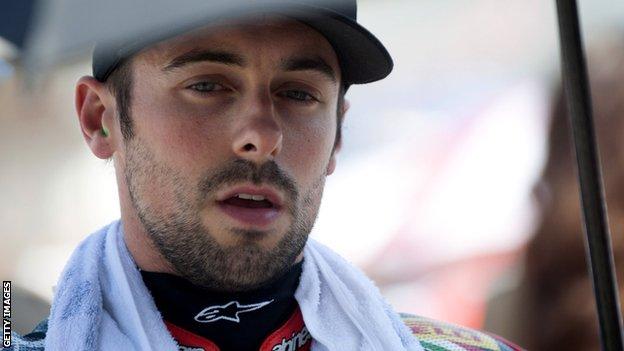 Aspar boss Gino Borsoi has admitted that he is worried by Ducati's interest in 2014 MotoGP target Eugene Laverty.

The Northern-Irishman is second in the World Superbike Championship, after recording his seventh win of the season with Aprilia in Laguna Seca.

"Eugene is our first [choice], because of Aprilia's involvement in this project," Borsoi said.

"At the moment we have just two options, Yonny Hernandez and Laverty.

"Eugene has a good relationship with Aprilia and Aprilia want to keep him in the factory. He would like to come to MotoGP and it's a good option also for us."

Laverty, whose brother Michael currently rides in MotoGP with the Paul Bird Motorsport team, was revealed as a target for Pramac Ducati after fellow Northern-Irishman Jonathan Rea rejected a deal with the satellite outfit.

Borsoi said "I'm worried of course because he's one of our options but we have to discuss it during this week so we will see."

Ducati's talks with Rea and Laverty are a big hint that the factory could end Ben Spies' MotoGP contract, with rumours of a possible switch for the Texan to a Ducati in World Superbikes.

Aspar are already close to signing Nicky Hayden as a replacement for Aleix Espargaro, who looks set to join the Forward Racing team in 2014.

"[Aleix] wants to go," Borsoi confirmed. "We've talked a few times with the Forward team and found more or less a solution. I think in a few weeks we will know the situation.

"We are still talking with Hayden and maybe by the next race we can fix the contract. We are so close."