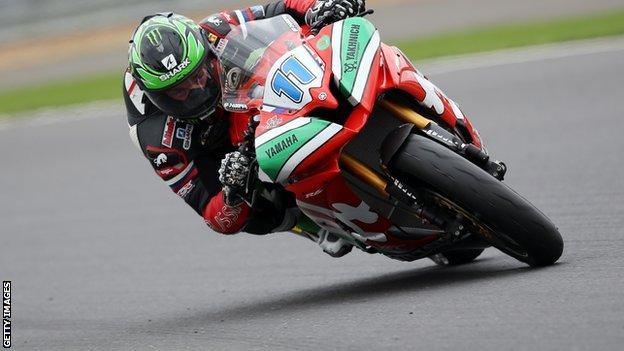 Britain's Sam Lowes has celebrated his World Supersport title by confirming that he will race in Moto2 next season.

The Lincoln-born rider, 23, clinched the crown with a second place finish at Magny-Cours in France on Saturday.

"To now be world champion is all a bit unbelievable," Lowes told BBC Radio Lincoln.

"This win has been a long time coming and it means everything to me.

His Yakhnich Yamaha team confirmed that the 23-year-old will leave for a yet-to-be-named side in the second tier of world motorcycle racing.

Herve Poncharal, the boss of the Tech 3 team, has already labelled Lowes "an exciting prospect for any Moto2 manager" after the Derby-based rider was linked with a move to the outfit in 2014.

Lowes, who has picked up five race wins this season and only needed two points to clinch the championship before the penultimate round in France, is already focused on adding to his Supersport championship.

"For me there is a lot more to be achieved in my sport," he said.

"But obviously to become a world champion at 23 is a fantastic thing and I feel I can move forward from here.

"This is my third year in the world championship and I feel that extra experience gained in the last two years meant I could put a lot into practice.

"This win has been a long time coming and it means everything to me. "