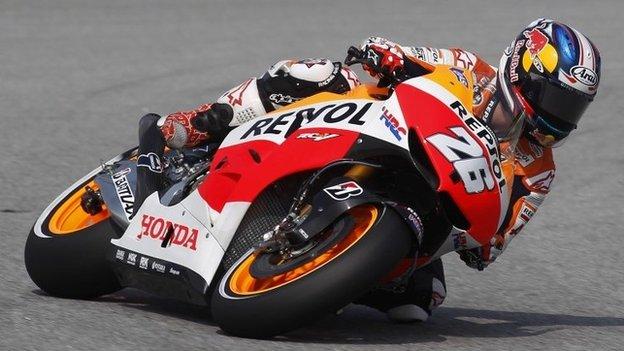 Championship leader Marc Marquez was second quickest, half a second behind his team-mate and compatriot.

Britain's Cal Crutchlow was third, ahead of Italian Valentino Rossi.

Reigning champion Lorenzo, who trails Marquez by 39 points in the standings with four rounds of the season remaining, was only sixth fastest, behind Spain's Lorenzo.

Marquez was given a penalty point but escaped a potential grid penalty for this weekend after a clash with Pedrosa in last month's Aragon Grand Prix.

Despite topping both practice sessions, last year's Malaysian Grand Prix winner Pedrosa said he was still feeling the effects of what happened in Spain.

"I expected to have less pain actually. But I was fast already from the beginning," he said. "If I can get a good painkiller for the race, maybe it's okay."

Lorenzo, who has admitted retaining the championship will be "almost impossible", said his Yamaha lagged behind the Hondas.

"We cannot control the performance of the other riders - we can just improve ourselves," said the Spaniard, who posted the fastest-ever lap of Sepang last year of 2:00.334.

"I have to be confident. It's the only way. If you don't feel confident or you are unhappy, it's the start of the finish."