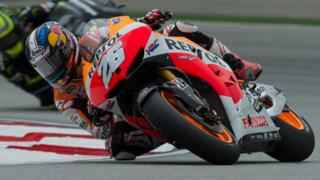 Spain's Dani Pedrosa climbs from fifth on the starting grid to win the Malaysian MotoGP.

Marc Marquez finished second and, in doing so, extended his championship lead to 43 points with three races remaining.

The top three at Sepang was an all-Spanish affair, completed by Jorge Lorenzo, with Cal Crutchlow sixth, one place ahead of fellow Briton Bradley Smith.