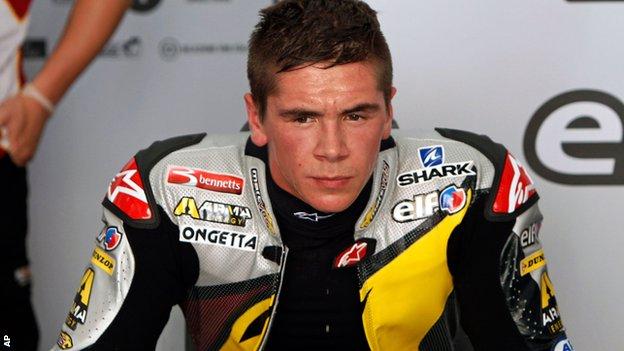 Winning championships in any sport is never easy, and Scott Redding is finding that out the hard way at the moment.

Just seven weeks ago, Redding won the Moto2 race at Silverstone to open up a 38-point lead at the top of the standings.

But after in Malaysia last week, title rival Pol Espargaro has trimmed his advantage to just nine points.

Espargaro - the pre-season favourite - has finished on the podium in each of the last three races and it is crunch time now.

Watching a big lead being whittled away is tough, both physically and psychologically, but now is the time for Redding to stand strong.

He has looked certain to become the first British rider to win a world championship since Barry Sheene all year, but now Espargaro has got the run on him.

However, this weekend's race could allow Scott to turn the momentum back in his favour.

He struggled on the long straights of Malaysia because he is down on top speed, but in Australia on Sunday he should be more competitive.

It's been 36 years since we had a British champion - and Scott is the man to end that wait before he moves up to MotoGP next year.

The MotoGP championship run-in is less tense, as Marc Marquez waits to seal his title win.

Marquez leads by 43 points and can win the title this weekend, but I don't think he will. If Marquez wins and Jorge Lorenzo finishes third or lower, then Marquez will take the title - but the form of Dani Pedrosa means that I don't see that happening on Sunday.

However, there is no panic from Marquez's side of the Repsol Honda garage. The 20-year-old has been a sensation in his debut year and I expect him to seal the championship in Japan on 27 October.

The buzz in the paddock this week is due to double MotoGP champion Casey Stoner being in town.

Unfortunately, despite plenty of rumour and speculation all year, he's not racing. He is promoting his new book and he will be doing some parade laps with other Aussie legends Mick Doohan and Wayne Gardiner.

He still says he won't come out of retirement - that he is happy just testing the bikes for Honda - but I'm still not sure. He is only 28 and maybe he'll be tempted back in a few years' time. But he has always been wired up differently to the other riders.

We have missed him this year - but his replacement Marquez has not been bad to watch...