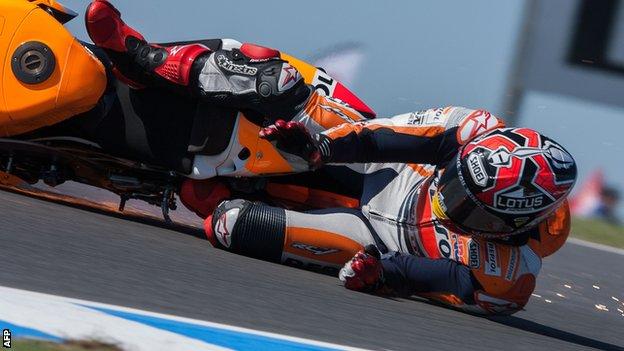 The 20-year-old Spaniard, who is closing in on the world title in his rookie season, came off his bike early in the afternoon session.

He was uninjured and was able to return to the circuit 20 minutes later.

Marquez is bidding to become the first rookie in 35 years to win the premier class title.

He leads the standings by 43 points and can win the championship on Sunday if he wins the race and closest challenger Lorenzo finishes third or lower.

"It's a pity about the crash right at the start of the afternoon run but we went back out with the second bike, which had a totally different geometry, and we had no time in which to change things. Thus, we used the initial set-up for the entire session."

Spain's Alvaro Bautista had the third-fastest lap, 0.477secs down on Lorenzo, with Marquez's Spanish team-mate Dani Pedrosa fourth at 0.517secs.

Pedrosa's afternoon practice session was disrupted when an engine mounting bolt, which was not properly locked, came loose, forcing him to stop on the track.

"Today was very positive, the new asphalt felt good and the tyres worked well for us," said Pedrosa. "The only setback was that we were unable to make the most of all the time available, due to a problem with the bike at the end of the afternoon session."

LCR Honda's Stefan Bradl, who fractured an ankle at Sepang last Saturday, was able to take part in opening practice but finished almost four seconds off the pace and was later declared unfit.