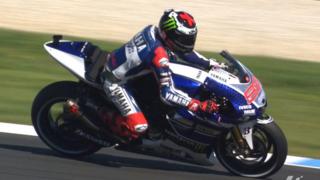 Marquez can clinch the championship on Sunday if he wins the race and Lorenzo finishes third or lower.

'He has an evil side' - Tsitsipas & Kyrgios continue row off-court

'We're better than that' - Hamilton on Verstappen boos

Highlights: Kyrgios stuns Tsitsipas in the match that had everything