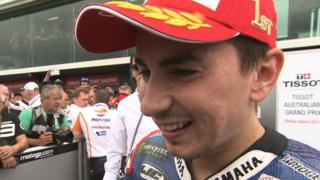 Jorge Lorenzo says winning the Australian MotoGP was "very emotional", as he keeps his title hopes alive at Phillip Island.

The Yamaha rider started from pole and led throughout, while championship leader Marc Marquez was dramatically disqualified after delaying a compulsory pit stop.