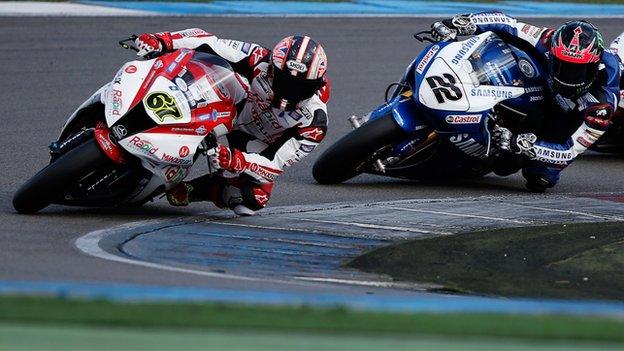 Shane Byrne says new British Superbike champion Alex Lowes has given him a fresh appreciation for the sport.

While the Kent rider, 36, relinquished the title and missed out on a record fourth championship at Brands Hatch on Sunday, he heaped praise on Lowes for becoming the youngest-ever winner.

"I'll say with my hand on my heart that if there is anyone that deserves it, Alex does," Byrne told BBC Radio Kent.

At the end of the day, new generations of riders come through

"The battles this year have made me realise how much I love my job."

Lowes, 23, paid tribute to the Rapid Solicitors Kawasaki rider after finishing narrowly ahead of him in the last race of the campaign to clinch his first major honour.

"I have to thank Shane because he's helped me be the person I am and racer I am," Lowes said.

The Lincoln rider, starting from the third row of the grid, only needed to finish ahead of Byrne, starting from 22nd position, to seal the the title.

In rain-soaked conditions 2003, 2008 and 2012 champion Byrne picked his way through the field in a stunning display to finish third, behind Lowes in second and Australian winner Josh Brookes.

"At the end of the day, new generations of riders come through," Byrne said.

"The cool thing about Alex is that we get on well and him praising me is an honour really.

"I'm happy with my performances, the way I rode, with my team and year in general, but not happy with being number two. But I did the best I could."